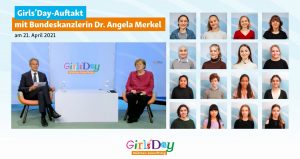 Men’s job, women’s job? – Job orientations are often challenging for young people and are carried with self-doubt, good or bad advice from adults, and taster offers, which are offered especially by companies and institutions that have high requirements for young people.

Since 2001, “Girls Day | Boys Day” is breaking typical stereotypes such as “This is only a job for men” or “Only women can do this” and changes the perspective towards a cliché-free job orientation. The day was initiated in 2001 and until 2010 it was for girls who should get the first insight into technical and scientific jobs. Since 2010, boys get the offer to get to know more about health and service jobs where men are underrepresented.

The aim of the day is to make job orientation easier for girls and boys and to get in touch with people who are against the typical stereotypes such as working as a woman in a “men’s job” and as a man in a “women’s job”. You can visit them in their daily work and question them directly and identify them as role models.

The annual Girls’Day has taken place in Germany since 2001. On this day, girls and women should get the motivation to try out technical and scientific jobs. Companies, organizations, and universities throughout Germany invite girls from the 5th grade and upwards to the Girls’Day who want to get to know the occupation. It highlights occupation training and courses of study in IT, crafts, sciences, and technology, in which women have been underrepresented so far so that girls can meet other female role models in leadership positions from business and politics. Through the day, the public becomes aware of the abilities of the girls, which opens new prospects for them and their future.

Boys’ Day has been decided since 2010 and in 2011 the first nationwide Boys’Day took place in Germany. Boys’Day follows the same purposes as Girls’ Day. On this day, boys get the opportunity to get to know jobs where women work in the majority. The aim is to support the cliché-free initiative and to establish a career and study choice free of gender clichés nationwide. There are a lot of job fields where male professionals and caregivers are searched for and are very welcome, for example in the field of social affairs, health, care, and education, especially where men are underrepresented.

Each year, Helliwood media & education participate at Girls Day and inspire girls for creative coding. This year we had the chance to present workshops for about 130 girls on April 22nd. The TurtleCoder is a programming environment and with the help of a turtle, you get a first impression of programming. Programming plays an important role for the future in almost all professional fields with the use of computers and the Internet. With the motto “Everyone can code”, Helliwood media & education’s vision is that all children can learn to program, regardless of gender or disabilities. A major goal of Helliwood media & education is to spread this vision and to further encourage it in schools, companies, and other organizations.